You Think Living In New York City Is Expensive, Try Living In These Priciest Cities Of The World – MUST READ

Tokyo returned to the ranks of the world’s 10 costliest cities in 2017 as Asia’s representation expanded, reflecting the region’s rising clout in the global economy.
Japan’s capital, the world’s costliest city until 2012, jumped seven places to No. 4 this year and Osaka climbed nine notches to No. 5, both bolstered by a resurgent yen, the Economist Intelligence Unit’s Worldwide Cost of Living Survey showed Tuesday.

Singapore and Hong Kong retained the top two spots and Seoul came in sixth. Zurich, the third most expensive, was the only impediment to Asia holding all top five slots.

New York was the only representative from North America, slipping to ninth from seventh due to a slight weakening of the dollar.

Singapore’s ranking as the world’s priciest city for the fourth consecutive year is largely due to the cost of owning a car there being the highest in the world. It is also the second-priciest for clothing. 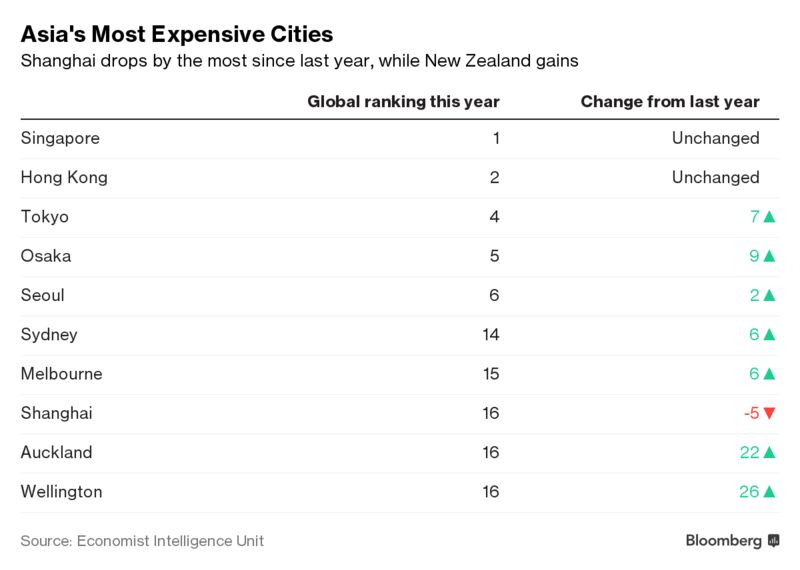 ”Singapore’s position is skewed slightly by the complex system for buying and registering cars as well as relatively high incomes, which means that it remains relatively affordable for many residents,” said Jon Copestake, editor of the survey.

The report, which compared prices of over 150 items across 133 cities, showed London and Manchester slid in response to uncertainty surrounding Brexit and the ensuing depreciation of the pound.

Rebounding prices continued to impact the cost of living in commodity-reliant countries, with the Brazilian cities of Sao Paulo and Rio de Janeiro the fastest-rising in terms of cost of living, moving up 29 and 27 places respectively.

While Asia is home to some of the world’s most expensive metropolises, it is also site of some of the cheapest, too. South Asian cities like Bangalore, Chennai, Karachi, Mumbai and New Delhi represent excellent value for money, according to the survey. This year, Almaty, Kazakhstan’s business center, and Lagos in Nigeria were ranked the world’s cheapest.