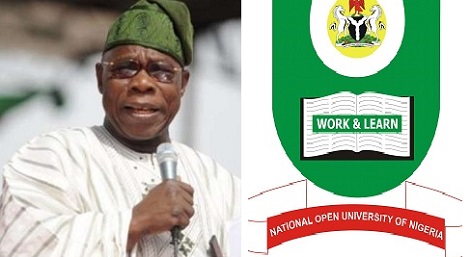 The former president is expected to receive a doctorate in Christian Theology, Adamu said at a news briefing on the institution’s 2018 convocation scheduled for Jan. 20 at its s headquarters in Jabi, Abuja,Nigeria.He said that Obasanjo would be considered for an appointment as a facilitator or supervisor as PhD was the least qualification for one to teach in the institution.

The vice-chancellor said that 14,771 was the highest number any institution in Nigeria had ever graduated at a convocation ceremony.

He said that in spite of being a former president, Obasanjo conducted himself properly and deservedly bagged Doctor of Philosophy in Christian Theology.

“One of the graduands is the first PhD graduate the institution will produce; a university must graduate students at academic Masters Level before graduating PhD.

“Only one candidate has been able to do that and that is Obasanjo; the Senate has found him worthy of the award and approved the conferment of PhD on him.

“There are lessons to be learnt from Obasanjo’s feat – one is never too old to learn. Obasanjo was about 80 years when he started the programme and has finished it at 82.

“Again, one is never too powerful to learn; he was the president twice and yet subjected himself to learning; learning is a humbling process.

“We will consider him for the post of a facilitator or supervisor; maybe for our Abeokuta Study Centre; we will suggest it to him.’’

Adamu said that that because of Obasanjo’s achievement, NOUN had received requests from other older citizens.

He said that the institution was able to graduate such a huge number of students because it had created its own internal data management which was previously handled by external vendors.

The vice-chancellor said that students who were hitherto not cleared by the external vendors had been cleared.

He said that NOUN’s Business School would soon take off and would run nine professional programmes.