Ganga Gala, a 103-year-old from Mulund, has become one of the oldest patients in the world to undergo a successful hip replacement surgery. 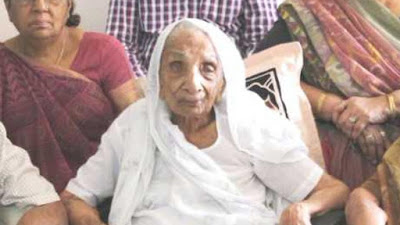 Ganga suffered a hip fracture on January 5 after falling from the bed. Her grandson Kirti, 60, said it was the seventh time she had fallen since July 2016.She was hospitalised — the family claims for the first time in her life and doctors took the decision to go ahead with surgery because all her health parameters were normal.

“Before July 2016, she didn’t need help to walk or do her daily activities. She even washed her own clothes and utensils. But after the last fall, she became immobile. It was too painful for her to even sleep,” said Kirti.

The family decided to take her to a hospital, but Ganga was adamant she did not need to go. “She hated going to a hospital because she has never been hospitalised. Even our family physician suggested against it,” Kriti said.

However, the family decided to get her admitted because they couldn’t bear to see her in pain and approached Dr Tejas Upasani, orthopaedic and computer-assisted joint replacement surgeon from Upasani Hospital, Mulund. Upasani had also operated on Ganga’s son, Hirji, two years ago, at the age of 85, successfully.

After a battery of tests, Upasani decided to do the surgery. “Apart from her fracture and partial hearing loss, the patient didn’t have any other medical complication such as blood sugar or cardiac anomalies, which is why we decided to operate,” said Upasani, who says he has operated on a 100-year-old patient in the past.

Ganga had suffered an intertrochanteric (upper part of the thigh bone) fracture, on the right side of hip. Doctors said avoiding the surgery could result in other complications like bed sores, chest infection and urine infection.

“Since her bone structure was slightly weak due to the age, we used special implants meant for osteoporosis (condition in which bones become weak and brittle) patients. It was teamwork. Our anaesthetists took extreme precaution with the dosage, physicians and intensivists, who handled the Intensive Care Units (ICU) worked in line to provide a new lease of life to the patient,” Upasani said.

After the surgery, Ganga was able to sit and sleep on the bed without assistance. Doctors said the implants will help hold her bone structure and the fracture will heal within two months.

Ganga’s PAN card says she was born in January 1915. She is the matriarch of a 80-member family. “We are really happy she is getting better and not in pain now,” Kirti said.