The horrific Moscow plane inferno which killed 41 was caused because the crew was so used to deploying autopilot that they made elementary errors when they had to fly manually.  …. Russian plane Crash 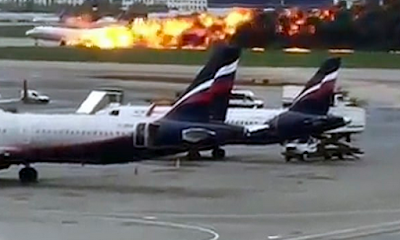 An expert claimed that the experienced captain Denis Evdokimov, hospitalised as a result of the crash, had never previously manually flown the Sukhoi Superjet 100 in so-called ‘direct mode’.A lightning strike soon after takeoff forced the pilots to make an emergency landing but this should not have led to the flames in which dozens were burned alive or killed by toxic fumes, say authorities in Moscow.

A shocking new video graphically shows the rough ‘jumping landing’ of the Sukhoi Superjet 100 at Moscow’s Sheremetyevo airport and the moment the fire ignited on 5 May.

Now reports say the crash investigation is leaning towards ‘pilot error’ over the landing during which the plane ignited in a fireball.

And leading Moscow experts say an ‘over-dependence on autopilot’ on commercial flights is an issue that should be addressed by all major airlines.

Despite the lightning strike which disabled the planes internal communications, an emergency landing in manual mode should have been relatively straightforward, according to Kommersant newspaper which cited sources in the official investigation.

But ‘it was the pilots themselves who dangerously speeded up the aircraft immediately before landing and, on top of that, put it into a dive’.

Post Views:
See also  What Nigeria SMEs Need to do to Excel in Export Business